I can honestly say that the day I broke my leg I was the fittest I’d ever been. It was a split-second encounter on a narrow road with an on-coming car. How we both managed to meet each other considering where the driver had started his day and me mine, is a mystery but that’s the cards that were dealt that day. At the previous transition point, I had gone back for a banana and lost 30 seconds and I remember thinking in hospital afterwards that had I not done that, I wouldn’t have met the driver at that tricky point. I was lying in the road for 25 minutes before help arrived but I was fortunate that my partner Dan McPherson had had a very big accident himself a couple of years earlier and so had been through something similar before. When help arrived and my old man showed up, I asked him how he was and he replied, “a lot better than you, son.” 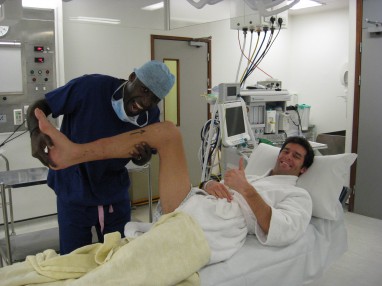 With my physio Roger before one of the many little screw removal operations I had following the accident.