With a wealth of recent experience and expert knowledge to tap in to, switching from interviewee to interviewer has come naturally to Mark as he steps into the world of TV punditry.

OTHER SIDE OF THE MIC

With twelve years under his belt in the sport’s top echelon and countless media interviews to his name, in 2014 Mark had the opportunity to step to the other side of the microphone and try his hand at TV punditry.

Mark joined Network Ten in Australia for their coverage of the Australian Grand Prix and armed with expert knowledge and having so recently been a regular in the Formula One paddock and on the starting grid himself, his intuition and unique insight into the world of Formula One helped him transition to the role quickly.

Since then Mark has worked with Ten at each Australian GP and at the 2015 Clipsal 500 round of the V8 Supercars championship. The same year he was invited to be a special guest pundit at the Erzberg Rodeo by Red Bull and he co-commentated three rounds of the World Rally Championship for Red Bull TV in 2017.

In 2016 while still racing full-time for Porsche in the FIA World Endurance Championship, Mark became a regular co-presenter and pundit for Channel 4’s F1 coverage in the UK alongside Steve Jones and David Coulthard, the three of whom built a quick rapport. Mark’s good relationships with current F1 drivers and team personnel have helped the trio deliver special insights and some entertainingly candid interviews and he remains part of the punditry team today.

While working at Grands Prix, Formula One Management have often asked Mark to facilitate the post-race podium where he took to interviewing his former team-mates and rivals live on the global stage with aplomb. 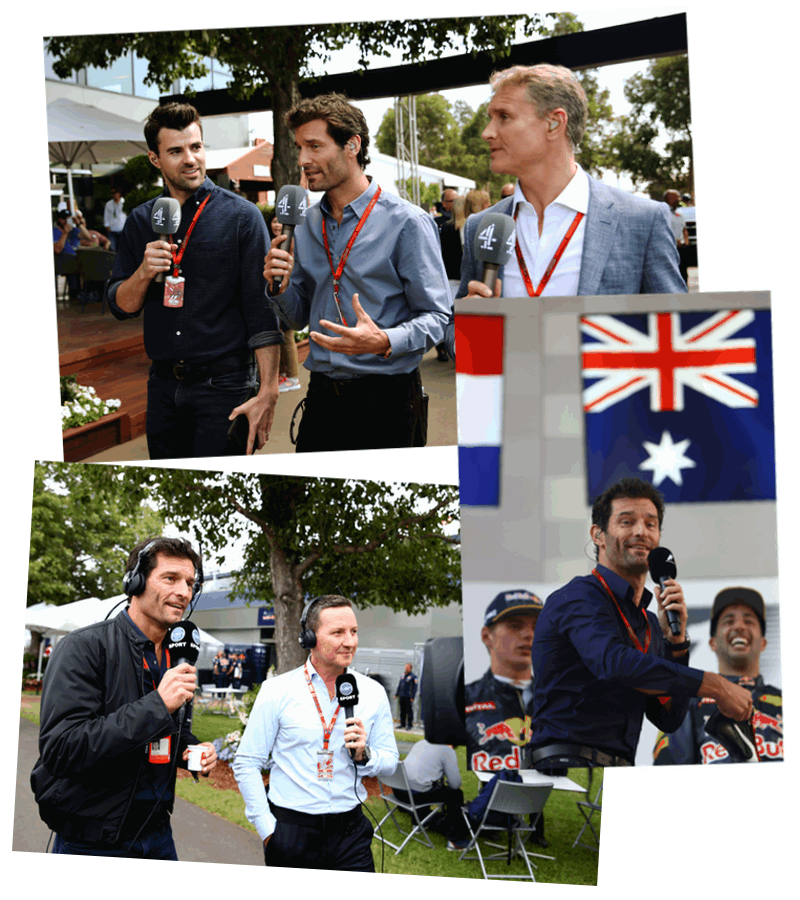 Often featured in documentaries (Mark was the subject of the ABC’s Australian Story in 2015), it was something new for Mark to try his hand at when he was asked by Red Bull to do the voiceover for the Toby Price Dakar Rally documentary ‘Paying the Price’.

Away from motorsport, Mark was able to indulge in his love of helicopter piloting when he visited the Air Zermatt mountain rescue team in Switzerland and featured in their TV documentary ‘The Horn’.

A sports-lover through and through, Mark has in the past enjoyed taking part in such UK sports quiz shows as the BBC’s a Question Of Sport (both as a panellist and Mystery Guest) and Sky’s A League of Their Own.