It was a dream come true and to make my debut at my home Grand Prix with a team owned by a fellow Aussie, Paul Stoddart, made it all the more poignant. I was the first Australian driver since David Brabham in 1994 and so there was a lot of hype which I did my best to shut out. The media intensity was something I didn’t understand because their knowledge of me and my scenario was very low. With the exception of the Nine Network and likes of Darrell Eastlake and Tim Sheridan, Mike Kable and a few of the specialist media, the rank-and-file Aussie press hadn’t been particularly supportive up my way up the ladder, so I knew I was only flavour of the moment because it was Melbourne GP time.

Half of Queanbeyan came down and were seated in the main grandstand directly opposite the Minardi garage. Although it was great having such support, once I was in the car it was good for me to pretend the grandstands were empty and to treat this new scenario as a test session. Prior to arriving in Melbourne, I had only done 17 or so laps at Valencia in the car. It wasn’t particularly comfortable, it was too small for me and my knees and elbows knew all about it over a Grand Prix distance. I told the team it was like trying to run a marathon in shoes two sizes too small and asked the guys what they could do about it. But it was Minardi and there was no money.

How we got the result we did was nothing short of a miracle. It was a race of attrition and we managed to hang on in there and grabbed fifth place at the flag. Afterwards was all a bit of a blur and slightly crazy! Ron Walker, the chairman of the AGPC, insisted Stoddy and I went up onto the podium after the official podium presentation as the crowd was going ballistic. I’m a bit of a stickler for tradition so wasn’t convinced or comfortable about doing it. Ironically it was the only time I stood on the podium at Albert Park so perhaps my gut feeling was right and I’ve been paying the price ever since! 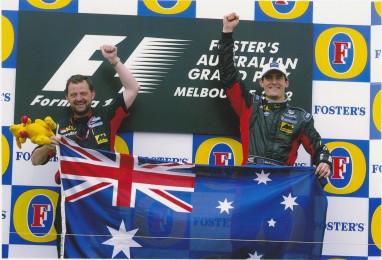 The famous (and only) shot of me on the Albert Park podium.

Afterwards, Michael Schumacher’s press officer came down to the Minardi garage to say that Michael (who had won the race) would like to shake my hand and so I went up to the Ferrari garage. Of course the photographers were all there waiting to capture the moment and it was one of the shots that made the next day’s headlines! It was a cute bit of PR and gave me an instant snapshot of how F1 works.

That night we didn’t know what to do…Ann was busy writing and distributing media releases and dealing with press enquiries for interviews, so we didn’t get out until late. The team had a bit of a party and after that we met up with some of the Queanbeyan crowd and wandered around the Crown Towers/Casino complex looking for somewhere to go to celebrate. I remember we queued to get into a nightclub but we got rejected so we headed off. Word quickly reached the bouncers just who they had turned away and they came running after us saying it was okay for us to go in. I told them where to go! In the end, we found an ice cream parlour that was open and then called it a day at 3am! So much for a big celebration!